In 2006, the Manitoba Runners’ Association celebrated its 35th Anniversary by establishing the MRA Road Running Hall of Fame. Each year, inductees are celebrated at the MRA Annual Hall of Fame Banquet. There are two MRA Hall of Fame plaques that celebrate the athletes, volunteers and running clubs who have raised the profile of road running in Manitoba. These plaques have finally found their new home in the James Daly Fieldhouse at the Max Bell Centre, University of Manitoba! 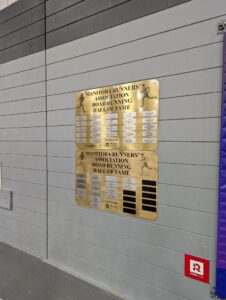 To view a picture of each Inductee’s individual plaque, click on the name.