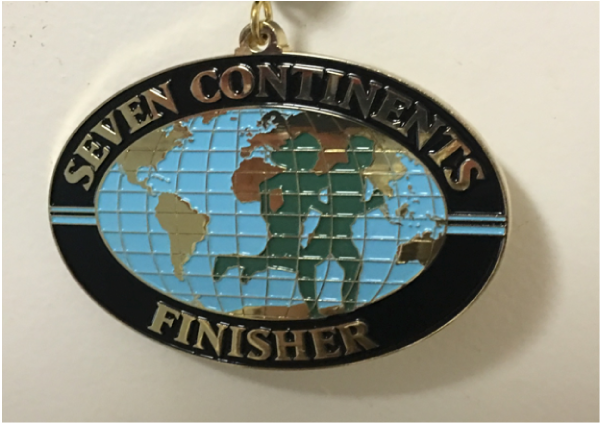 ­“Ho hum, there’s an elephant just outside our tent!”   Match that for an experience on a running trip!

Although I had written articles on Wall of China, Easter Island, and Antarctica, through 2013, I had promised a 7 continents article when the ½ Marathons on all 7 were done All were with my son Jamie in the following order and dates.   There is absolutely no way that I could pick a favorite when we always had so much fun. Both my son and I share a crazy sense of humour that came through every run. For example, in China, beyond the goat trail descent at one point, we found ourselves following a local with a long stick on her shoulders balancing two pails of water while hiking straight up a hill.   Fortunately, the path was way too narrow to get by her since we could not have mustered the energy nor speed to do so. Humbling! I do my best not to make these just a travel log since there were actual half marathons to be run while never was speed an issue nor incentive!

Apparently Jamie heard about the seven continents club around the China run but I really only clued in when a few runners were awarded the seven continents medal at a special dinner for the Marathon Tours group on Easter Island. They were so keen on Antarctica and I could feel Jamie’s excitement quickly building.   So after that we bit the bullet and paid the $$$ to join the 7 Continents Club to qualify to go to Antarctica. With that we were on the 3 year wait list. That would have been 2016 but a “fender bender” on the original ship for the 2013 sailing caused a 3 week delay for which several people could not accommodate. After much deliberation in the 3 days we had to decide, I sent a 5 a.m. email “No worries, we’ll get there”, to which Jamie replied to “Now would be a good time.” I danced the rest of the day.

Every trip and run was unique: from scenery, like minds (…We do this crazy running thing!), plain fun, to absolutely every terrain and challenge of the runs / races.

We felt this was the perfect “Oceana” choice for over 2 weeks and 3 weekends giving us the ability to cover both islands. While we stayed in Auckland, we had three days to sight see the area and relax before the run. Wahiki Island was reached by ferry for a full day excursion of hiking, sightseeing and eating!   Everything grows in New Zealand from grapes to semi tropical fruit! I think I ate every form of lamb possible! I noticed that locals spend most of their time in the great outdoors. On a somewhat cool evening, the outdoor patio/ eating area would be packed while it was easy to get seating inside.

If you follow World Cup, you would know the explanation for so few spectators at the ½ marathon on Sunday, November 1: The All Black world championship was on at the same time in Great Britain.   Our run highlight was crossing the immense harbour bridge that is only open to pedestrians once a year, for this run qualifying time which was only until mid morning.   I did lose Jamie on the bridge in his quest to keep up with a blond bombshell but he couldn’t keep up and we carried on together. Instead of worrying about race finish time once we passed the cut off point for time to be able to go on the bridge we enjoyed the incredible view and took a few photo ops.

Then we were free to explore the rest of the islands….My checklist included the glow worm caves, Rotorua where I chalked up the 4th and last set of hot springs / geysers in the world. Then on to Napier where we could have been the first in the world to see the sun rise had it not been raining. Finally, lively Wellington, the nation capital and last stop on the north island. Highlights on the south island were Christchurch which had been devastated by earthquakes a few years prior but is carefully rebuilding and showing their amazing sense of humour along with their industriousness. Then we drove (Always on the wrong side of the road – argh-) to Mount Cook for more beautiful scenery and of course I took pics of my son in front of a statue of his namesake, the Captain. Finally, we spent a few days in lively Queenstown, the adventure capital in another fabulously scenic area. Many of the latter were film sites for Lord of the Rings…How embarrassing to be the only passenger on a 4 hour van trip who had not seen the movies.   Probably a trip from Queenstown to Milford Sound on a small plane, on our last full day, was my favourite excursion of the trip!

By late 2015, Jamie was ready to put on the pressure to have all 7 continents on one passport with the deadline of August 2016 for Africa   Because a tornado in the Barrie, Ontario area caused a 24 hour delay for our Reykjavik departure in 2009 we had to “dumb down” the ½ to a later starting 10 k.   I love Iceland so much that when I found a ½ in Reykjavik for April 2016 we entered immediately.   Arriving 2 days ahead of the run allowed time for plenty of fun, food and sightseeing. Nothing like travelling with 3 young lawyers….

We were picked up on race morning at our hotel by the race director! Who knew there was such a lovely forested area adjacent to a small domestic airport? With the out and back course going from a park, through a forest, near waterfalls and then running alongside the ocean, it was way more breathtaking than my running! How can there be so many hills on the edge of a relatively flat little city? This trip was on our own, not Marathon tours and still there were people from all over the world.

Sunday was incredible. We rented a car to go to a distant relative’s (Einer) horse farm, about an hour and a half drive from Reykjavik, driving through a 10 k tunnel under a fiord, then through more beautiful scenery.   The farm had Mountains in the background, some ocean front property, its own source of underground hot water for all the geothermal benefits, and at least 100 beautiful horses in various locations on the property. Einer took an early retirement from a corporate job in the USA about a dozen years ago to bring his ailing wife back to Iceland.   He then bought a horse…..

The Amazing Masaii Run is the ‘baby’ of our Marathon Tours guide, who looked after us on Easter Island and then Auckland. Having been booked for Madagascar, previously, only to have it cancelled, our ears were open to the charm of Kenya.   Again we took close to three weeks with great sightseeing before and after the race. With Nairobi as the jumping off point we travelled the horrendous dusty roads by jeeps and mini buses north to the equator and into the foothills of Mount Kenya. Three of the “camps” or country clubs, had tented, private, sleeping quarters with all the amenities, including room service for morning coffee. Not roughing it at all! Safari, being a term for any short or long excursion, meant that we went on safari as often as three times a day!

So we spent most of the middle week in the Rift Valley, from where came many world class runners. They look as if they’re on stilts! Our lodging around race day was essentially on a mountain top and gorgeous. Each pair had their own “house” while sharing library, staff and breakfast area with 2 other houses. The main area for other meals and evening gathering was down the mountain slightly, near the massage cottage, etc. The recognition for Jamie and I completing the 7 continents was at the post run dinner in the main room carved out of the mountain. Neat!

Did I mention the horrible roads? We had been warned we would never complain about Canadian pot holes again. I managed to fall a couple of days before the run and then during the run on a serious downhill (the only downhill!) Despite being so close to the equator, heat was way less of a problem than altitude. In fact, at mile high, evenings were seriously cooled, as we had been warned. Our run time was never a concern but about ¾ of the way of our ½ marathon loop, we heard a rustle that turned out to be the lead runner of the full. Yes, his second loop. I had to laugh as he didn’t slow down a nanosecond for another steep hill in front of us but the accompanying motor cycle barely made the ascent. Many of the finishers looked even more as if they had been mugged than I did, from falling on the rocky terrain. But it was all smiles for Jamie and I, posing / holding 7 fingers across the finish line.

Then we flew in a tiny plane across the beautiful lower Rift Valley, to see the massive irrigation and fertile crops. Such a contrast to the abject poverty in the very dry higher areas where the children go on foot 20 k one way to school, if it is available.

The plane landed near the Governor’s Camps on opposite sides of a river. Again luxury and the big 5 animals spotted on various safaris. What I cannot describe is the ”crossing” of the Masai River by a herd of hundreds of Wildebeasts led by more intelligent Zebras. It seems to be a case of the grass is greener since we saw both directions on different days, by different herds. We were able to make a video of this “crossing.” By our last morning there, I uttered “ho hum, there’s an elephant just outside our tent!”

Finally, we took a luxury break on the south coast of Kenya, on the white sand of the Indian Ocean to end off our time in Africa. My big wish for the small plane trip from Nairobe to Diani Beach was for a view of Mount Kilimanjaro. As everything else, it was spectacular.

In conclusion, I refuse to pick a favourite. To do all this with my son is absolutely the best part.